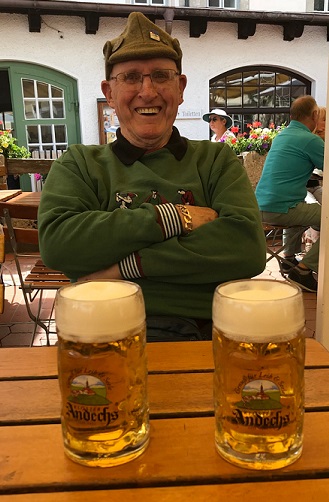 In Center Valley, Pennsylvania, on Sunday, July 31st, 2022, Curtis Updegrave entered into eternal rest. He was 91 and a half. Curt was born on November 14, 1930, in Shelly, Pennsylvania, a suburb of Coopersburg and Quakertown. He was the beloved son of Opie and Helen Updegrave, and younger brother to Walter G. Updegrave. Curt was predeceased by his wife Vickie.

Curt Updegrave’s happiest memories included raising his two sons with his wife Vickie, going on trips to Germany with friends and family and drinking beer from monasteries dated back to the 15th century, serving his hometown community, spending time with friends at the Firehouse Social Club, and going on daily walks through the local golf course.

His mother, Helen Updegrave, who was deeply connected to the Pennsylvania Dutch community, primarily spoke Dutch over English in the early days. She passed the language onto Curt, who utilized his fluency during his travels to Bavaria, Germany. He could have passed as a remote mountain man or a German Hillbilly as the locals saw him as one of their own.

Curt’s father was Opie Curtin Updegrave, who passed away just before he was born. Later, Helen married a man named George Hoffman who became a father figure to Curt and his brother, Walter.

At 13 years of age, George, Helen, Walter, and Curt moved into a new house on Main Street provided by Walter Updegrave, Curt’s grandfather. Walter opened and managed Updegrave Lumber Company. He was also President of the Coopersburg National Bank.

Curt and Walter enjoyed their time growing up in Coopersburg. Their mother, Helen, was a strong German woman who kept a clean and orderly house. She was a great mother and grandmother. Helen taught Curt’s son’s Scott and Michael how to search for wild strawberries, asparagus, onions, blackberries, raspberries, mulberries, birchbark and Morrell mushrooms. She grew sprawling gardens and could survive on her own homegrown food. Christmas dinners and summer picnics were always great events.

Curt attended Coopersburg School from grades one to twelve. Upon graduating high school, he went to Moravian College in Bethlehem, PA. Curt’s studies were interrupted when he was drafted into the Army in 1953. He completed basic training in Missouri where he became Sergeant and trained troops. He also dutifully took charge of the mail facility. After military service, he took the train from Chicago and returned to his hometown of Coopersburg. Curt returned to Moravian College and received his Business Degree.

Upon his return to Coopersburg, Curt began dating Vivian Updegrave. They married in 1955 and honeymooned in the Pocono Mountains. In June of 1956 they completed the construction of the house they would live in for the next 65 years. In 1956 Scott was born and in 1959 Michael was born.

Curt, Vickie, Scott and Michael traveled extensively as Vickie was very adventurous and loved to see the world. She believed that the best way to get the most out of life and understand ourselves was to experience the lives of others. She enjoyed the culinary adventures of other cities and countries and instilled in her family and friends her own zest for travel.

In 1983, Vivian decided the family should go on a road trip through Europe. So along with the family and a few friends, the Updegrave’s traveled around Germany, Switzerland and Austria. This would mark the beginning of a yearly adventure to Germany with many visits to Oktoberfest and travels across Europe.

Curt retired from the Updegrave Lumber Company at 55 years young and after retirement worked in the pro shop at the Locust Valley Golf course for 20 years. Each morning he and his labrador retriever Cleo would walk the golf course collecting golf balls. At any given time, Curt would have 10,000 golf balls.

In his free time, Curt spent time with his wife, on the golf course, or at the Coopersburg Fire House Social Club. He was a 70-year member. Curt was also a lifelong member of the Coopersburg Moravian Church and served on various boards over the years. He was a frequent Christmas service candle server.

Curtis Updegrave is survived by his sons, Scott (Deborah) and Michael (Corinne), as well as his grandchildren Andrew, Alyssa and Emma.

A Funeral will be held on Tuesday September 27th, 2022 at 11 AM at MorningStar Moravian Church at 234 S. Main Street Coopersburg, PA. Visitation will be at 10:30 AM. The burial will be held at Zion Hill Cemetery immediately following the funeral service. Arrangements by Stephens Funeral Home, Inc. www.stephensfuneral.com.