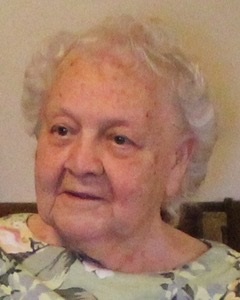 Elizabeth (Betty) June Stephens, 94, of Myerstown, passed away Wednesday, September 2, 2020 in Stoneridge Retirement Village. Born in Bethlehem, she was the daughter of the late Arthur and Catharine (Rezler) Remaly and the wife of the late Rev. William A. (Bill) Stephens, of Allentown.

Elizabeth (Betty) attended Liberty High School, in Bethlehem, but was prevented from graduating due to family needs in the Great Depression.  She served as a “Rosie the Riveter” (for Vultee Air Products, Allentown) during WW2 (while Bill served with the US Army in Europe). She drove the kiddie train at Hess’s Department Store throughout the holidays. During the recessions of the 1950s she helped support her family by selling home-made potato chips and greeting cards door-to-door and working in various textile and sewing jobs.

Elizabeth (Betty) was an excellent organizer. Her life was devoted to Christian service and promoting healthy forms of youth education and development.  She led Bible Clubs in South Allentown and was an effective Sunday School Superintendent at Zion E. C. Church, Susquehanna St., Allentown. She implemented award and incentive programs for children to learn Bible verses (one girl memorized the entire Psalm 119).  She developed costumes and scripts for church plays at Christmas and Easter to spotlight youth.  She was skilled in telling flannel-graph stories.  She helped youth develop quality leadership abilities through the inter-denominational Christian Endeavor movement.  When Bill entered the ministry, in 1958, she supported him in various administrative duties, as choir director, as a Vacation Bible School leader, and in youth telephone ministry.  She made learning fun using various parlor games and jokes to alleviate the boredom in moments of delay or waiting.

She loved to spend quality time with her grandchildren and great-grandchildren, keeping them entertained by sharing a kind-of “second childhood” with them and including them on vacations.

Betty’s father, Arthur, of Bethlehem, was the son of Levi G. and Elizabeth C. (Frommer) Remaly.  His ancestor, George Remaly, served in the American Revolution.  Elizabeth (Frommer) Remaly (Betty’s namesake) was the daughter of John Frommer, an immigrant from Isingen, Wuerttemberg, Germany.

Betty’s mother, Catherine/Katarzyna, was the daughter of Stanley/Stanisław and Frances/Franciszka (Nicińska) Rezler of Grabienice Parish, Powiat Konin, Poland.  Stanley was drafted into the Imperial Russian Army, in 1904, during the Russo-Japanese War and sent to Manchuria but never returned.  In 1906, Frances emigrated to America; and in 1913, Stanley’s brother, Jan, brought Catharine and her brother Edward/Zygmunt to America. They settled in Fogelsville with their mother, Frances and step-father, Jacob Bahleda.