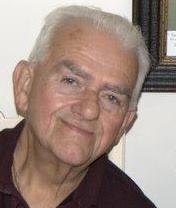 Jack Wenner passed away on Monday, December 31, 2018, surrounded by imperfect people that loved him absolutely perfectly. He was the husband of his wife, Anna, whom he adored and loved dearly. They celebrated their 55th wedding anniversary last April. Jack was born in Allentown, the son of the late Lamont and Carolyn (Miller) Wenner and brother of the late Barbara Lichtenwalner. He was employed as a steel worker for Bethlehem Steel for 31 years before retiring in 1996. Jack was a member of St. Joseph the Worker Catholic Church, Orefield where he was a member of the funeral choir and was a Fourth Degree Knight with the Knights of Columbus.  He was a veteran of the United States Army.

Jack filled his family’s lives with jokes (both corny and practical) and a love that made you feel safe from the outside world and brave enough to face it. He loved being outside and always knew which berries to eat and how to avoid the sticker bushes. Jack was an expert at using a blade of grass to whistle and catching frogs in the pool (although the frogs were imaginary and he was really just setting you up for a splash). He was an avid reader and an above average pinochle player. He was fluent in Pennsylvanian Dutch and had an uncanny ability to accurately estimate the distance of a storm by counting the seconds between thunder and lightning. He understood the value of hard work, getting your hands dirty, and taking a well deserved nap. He was a tremendous fan of Johnny Cash, Johnny Paycheck, the Philadelphia Phillies, and scaring neighborhood children on Halloween. Jack was a devoted husband, wonderful father, and an amazing grandfather. He is loved beyond measure and will be missed without end.

Services will be private for the convenience of the family. In lieu of formal services, his life should be remembered the way it was lived, with love, laughter, and an appreciation of the simple things that matter most in life. So, raise a glass as you sit around the dinner table with your family, enjoying delicious food. Put away your electronic devices and engaged in face-to-face conversation. Go for a nature walk. Drink from a garden hose. Enjoy a thunderstorm. Sing loudly while you drive down a country road. Take a nap outside on a sunny day. Pick up a book and go anywhere or be anyone you’d like. But most of all, be a kind and good person. Because above all, Jack was a kind and good man.

Contributions can be made to the Alzheimer’s Association https://alz.org/