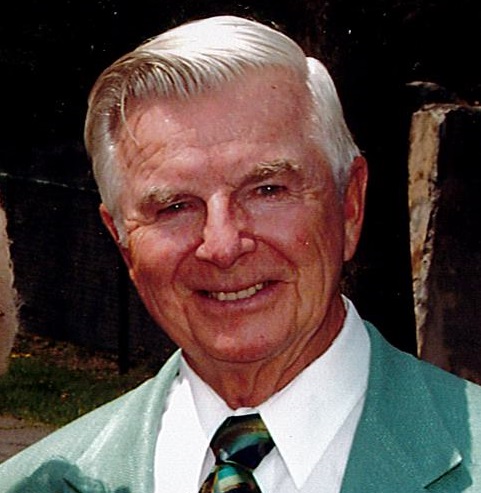 James Walker Murray, 89, of Center Valley, PA passed away at home on Thursday, August 29, 2019. Jimmy was the beloved husband of the late Myra A. (Bray) Murray. He was born in Plainfield, NJ on Monday, October 28, 1929. The son of the late Hugh D. and Gertrude M. (Somers) Murray. Jim was one of ten children. With only an eight-grade education Jim worked various jobs until he started selling baked goods for Dugan Brother’s Bakery and then Burry Biscuit in 1952. In 1965, Jim moved his family from New Jersey to the Lehigh Valley to work for the Allen Food Products Company, Inc. as the assistant director of sales and marketing. In 1970, he became the Vice President of sales and marketing. Jim became the President and Chief Executive Officer of the ALPO Pet Foods Division in 1973 at age 43. At age 51, Jim left Alpo Pet Foods to purchase Cadillac Pet Foods. Jim was the CEO of Cadillac from 1981 until 1987 when he sold the business to retire. As a man of such little education he achieved great success. He served in the National Guard and was a volunteer fireman in Watchung, NJ for many years. Jim served on the board of trustees for the Allentown-Bethlehem-Easton Airport and Allentown College (DeSales University) from 1975-1984. He was an active member of the Assumption of the Blessed Virgin Mary Roman Catholic Church, Bethlehem. Jim loved to travel, take family trips, swimming and water skiing at Lake Hopatcong, NJ, playing cards with friends, golfing at the Lehigh and Saucon Valley Country Clubs, and snow skiing at Bromley Mountain, VT. Most importantly he was a loving husband, father, grandfather, great grandfather, brother, uncle, great uncle and friend.