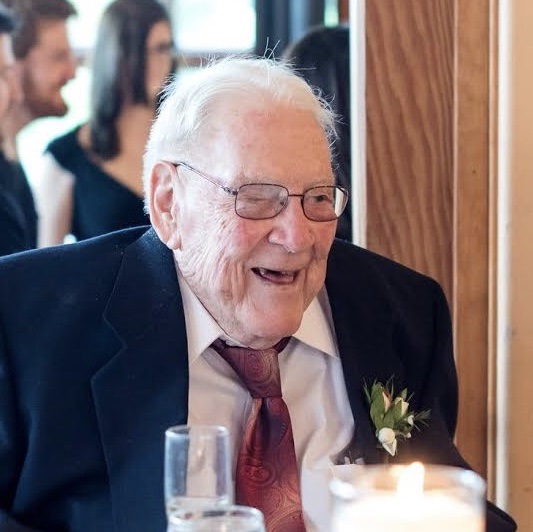 Surrounded by his loving family, Joseph B. Solly passed away on July 2, 2020 at home.

Joseph was born on August 20, 1923 in Philadelphia to Walter C. Solly and Helen Albertson, who both predeceased him.

Shortly after he was born, his family moved to Paxtang where he grew up alongside his brother Howard. He graduated from John Harris High School in June 1941, and then attended Lehigh University. On June 7, 1943, he left Lehigh University to join the United States Marine Corps. He was a World War II veteran proudly serving his country in Saipan, Okinawa, and Nagasaki, Japan. He was honorably discharged on May 17, 1946 after World War II had ended. He returned to school and graduated as a chemical engineer in 1949. He went on to spend 31 years working for Mobil Oil Corporation, now known as Exxon Mobil, until he retired in 1987.

Joseph married Margaret McGowan in January 1956. They built a beautiful life together in Allentown and spent 62 years together until her passing in 2018.

Throughout his life, his hobbies included woodworking, where he built bookshelves, desks, tables, and more for his family and friends; doing puzzles, like the crossword, 1000-piece challenges, and the cryptoquote; reading books, specifically a good mystery or crime novel; and traveling with his family, especially to Maine with his beloved wife. Joseph also loved spending time with his children and grandchildren. He loved watching the Phillies play baseball and enjoyed going to Iron Pigs games. He loved a good game of Words with Friends with his grandchildren and he almost always won.

Joseph is survived by his son Thomas J. Solly of Allentown, daughter Joanne S. Kelly and her husband Brian of Bethlehem, son Carl W. Solly and his wife Claire of Hilton Head, S.C. He is also survived by his grandchildren who he loved and adored: Kathryn E. Alger and her husband Jonathan, Megan L. Roth, Erica M. Roth and her fiancé Kyle Riopelle, Joseph A. Solly, E. Reed Solly, Matthew J. Kelly and his wife Tiffany, Nathan R. Kelly and one great grandchild Anthony J. Kelly. Also surviving are many nieces and nephews who have many wonderful memories with him.

Services for Joseph will be private. Arrangements by Stephens Funeral Home, Inc., www.stephensfuneral.com