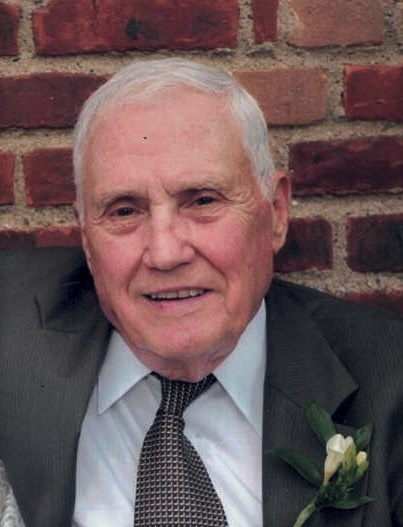 Patrick Joseph Murphy II, 89, a longtime resident of Newtown, PA, passed away on June 14th, Flag Day.  Born at home on July 6, 1930 in Donora, PA, he was the oldest of 4 children. He was married to his devoted wife, Virginia F. (Celigoi) Murphy, with whom he recently celebrated their 62nd anniversary on June 7. Together they raised their five children in their home of nearly 60 years.

Patrick was preceded in death by his brothers, Daniel and Gerald. In addition to his wife Virginia, he is survived by his sister, Isabel Doris Murphy of Richmond, VA, and his five children: Cathleen of Coopersburg, PA; Patrick (Alice) of Yardley, PA; David of Hatboro, PA; Carol (E.J.) of Bloomsburg, PA; and Michael (Kim) of Bedminster, PA.

Patrick was a proud alumnus of the University of Pittsburgh, where he earned both his Bachelor’s Degree (’53) and Master’s Degree (’59) in Industrial Engineering.  While attending Pitt, he was a cadet in ROTC and first baseman for the Panthers baseball team. Patrick was always interested in the events at his alma mater, and was proud to say, “Hail to Pitt.” After graduation, Patrick worked for U.S. Steel in Pittsburgh, and later at Fairless Hills for 30 years. He finished his long career by serving as a civilian engineer with the U.S. Department of the Navy.

Patrick took pride in his service to our nation as a Korean War veteran in the Army Corps of Engineers. He proudly displayed the American flag at his home, and attended numerous Newtown Memorial Day and Veteran’s Day celebrations throughout the years.

Patrick was a long-time parishioner of Saint Andrew Catholic Church in Newtown, PA., where all of his children attended Catholic grade school. He was devout in practicing his Catholic faith, and served as an usher at the church well into his 80’s.

Service was important to Patrick and he contributed to his community in many ways, including coaching for the Newtown Little League, serving as his sons’ Boy Scout Scoutmaster, and working as a volunteer tax preparer for the AARP.

Affectionately known as “Pops,” family and friends knew him as a very social person, making friends with everyone in his community.  He was known for giving sage advice, talking with the locals and working in his yard. Pops enjoyed a good cigar, a strong cup of Starbucks coffee, and a glass of bourbon and water before dinner. Pops was a great influence and affectionate grandfather to 9 grandchildren: Elizabeth, Kathryn, Patricia, Patrick, Alison, Connor, Ryan, Sarah, and Sean. He spent many of his last days sharing lunch and enjoying time with his “best buddy,” Harper Rose, his great-granddaughter.

A Mass of Christian Burial will be held at the Olde Church of St. Andrew, 135 S. Sycamore Street in Newtown on July 31: Greeting from 11 AM -12 noon, Mass at 12 noon.  Interment at Washington Crossing National Cemetery will take place at 1:30 PM. Arrangements by Stephens Funeral Home, Inc. www.stephensfuneral.com.

In lieu of flowers, the family requests donations be made to St. Andrew Catholic Church: Friends of the Olde Church, 81 Swamp Road, Newtown PA 18940.