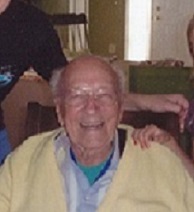 Robert E. “Bob” Davis, 89, of Allentown, passed away Monday, June 10, 2019.  He was the husband of the late Elizabeth A. (Ott) Davis.  Born in Bethlehem August 20, 1929, he was a son of the late Herbert D. and Katie M. (Giesau) Davis.  He was an Army veteran of the Korean War and prior to retiring, was a supervisor employed at Bell Telephone.  For many years, Bob was a member of the Masonic New Temple Lodge #720.  In addition, he was a member of Asbury United Methodist Church and was well known for his hugs and smile.  He enjoyed taking long walks outdoors, but his love for his family and his faith in Jesus were the primary focus of a life well lived.  Survivors: daughters, Deborah D. Faulkner and husband, Mark, CT, Donna D. Kresge and husband, Brian, Allentown; grandchildren, Mitchell, Kiley and Stephanie Kresge; three great granddaughters; brother, Harold; sister, Hope Wilson; brother-in-law, Alvin Ott; several nieces and nephews.  Services: 11 AM Friday in Asbury United Methodist Church, 1533 Springhouse Rd.  Call 10 AM until service time.  Arrangements entrusted to STEPHENS FUNERAL HOME, INC.  Contributions: in lieu of flowers, to Asbury United Methodist Church 18104.