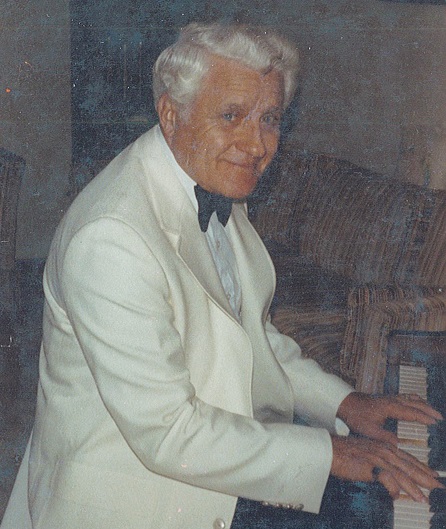 Robert James Hutchings, 98, went to the Lord on January 11, 2020 at L.V. Hospice, Allentown. Born in Bloomsburg, PA in 1921, he was the son of the late Maud (Van Dine) and Ira Hutchings. He graduated from Bloomsburg H.S. in 1939. Mr. Hutchings was preceded in death by wife, Phyllis and 2 sisters and 2 brothers. Prior to retiring in 1985, Mr. Hutchings was employed by Hess’ Department Store in Allentown for 20 years. He lived in Myrtle Beach, South Carolina, for 21 years before returning to Allentown area. As an accomplished professional musician, in a career that spanned 8 decades, he played in numerous professional groups. He was a member of the Red Cross Dance Band and played many USO events. As a WWII veteran, Mr. Hutchings proudly served on General Eisenhower’s staff in Europe and North Africa. For his work at the Casablanca Conference, he received letters of commendation from Roosevelt and four generals, including Patton and George C. Marshall. He received a Bronze Star for his wartime service. Robert served on the staff for SHAEF (Supreme Headquarters Allied Expeditionary Force) that was under the command of President Roosevelt and Prime Minister Churchill.

Survivors: Robert is survived by sons John M. (Patricia B.), New Hope, James R. (Carol), Allentown and daughter, Patricia E., Allentown; 3 grandchildren; 6 great-grandchildren and many nieces and nephews. The family extends great appreciation to staff at Country Meadows for the love and care he received during his stay.