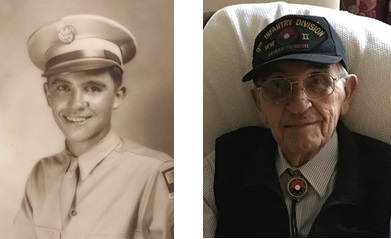 Rolland J. Correll, 95, formerly of Allentown, PA, passed away Friday, July 31, 2020 in the LVHN Hospice.  He formerly resided at Atria Senior Living, Bethlehem. He was lovingly cared for by family members, Atria staff, and LVHN Hospice healthcare providers. Born October 14, 1924, in Allentown (Rittersville) PA, he was the son of the late Roland and Viola (Kuhns) Correll. He was the husband of the late Florence A. (Haney) Correll who passed away November 13, 2018. Rolland was a graduate of Liberty H.S. He was an electrician at Bethlehem Steel for 40 years before retiring in 1983. He was a member of S. Allentown Optimist Club for 10 years. He was an Army veteran of WWII, serving with the 9th Infantry Division, 60th Infantry Regiment and participated in the invasion of Normandy, France. He was involved in multiple campaigns through France, Belgium, and Germany where he was captured in the Huertgen Forest. Rolland was held prisoner in Stalag 7A, Moosburg, Germany. He was the recipient of two Purple Hearts, Bronze Star of Valor, POW Survivor Badge, and ETO ribbon with four Bronze (battle) stars. His experiences in combat and as a prisoner of war, described in his own words, can be found at:

Rolland was past commander of the Greater Lehigh Chapter of American ex-POWs, lifetime member of Military Order of the Purple Heart, National League of POW/MIA Families, and the VFW.

Services: Private at the convenience of the family. Arrangements by Stephens Funeral Home, Inc. www.stephensfuneral.com.